1. Lunchtime explosions are the norm.

The first thing you’ll notice as you fly into the Côte d’Azur is the water. The Mediterranean sea is a breathtaking turquoise that rivals even the Caribbean. The second thing you’ll notice after you land is the cannon. That’s right. Every day, at noon on the dot, the sky is filled with a loud boom. The unnerving tradition dates back to 1860 when a former Scottish army officer and his wife would holiday in Nice for the winter.

The tale goes that his wife would lose track of time while strolling the Promenade des Anglais with friends and forget to come home to prepare lunch. As a former military officer with a penchant for punctuality he dreamt up a solution to ensure his wife would never forget this important task ever again. So, like any hungry man without a cell phone would do, he got the permission from the city council that allowed him to fire a cannon every day at noon to remind his wife to come home, and the tradition stuck ever since.

The Niçois don’t bat an eye, but it makes it quite easy to spot the tourists (myself included) when the explosion goes off. Today the cannon has been replaced by a really loud firecracker, yet it’s surprisingly not automated – the same man has been detonating it every day for the past twenty two years.

2. The French are serious about their cheese.

This one is obvious. The French make some of the most delicious cheese in the world. However, like most Americans, I was used to going to just one grocery store for my shopping. In France there’s an immense amount of national pride when it comes to the quality of local and regional goods. You can still find numerous specialty stores like bakeries, butchers, fresh produce markets and stores that sell only cheese.

While larger chains are prevalent (and you can certainly buy all of your groceries in one stop if you like) the option exists to stop in the neighborhood fromagerie for a personalized recommendation. I knew bakeries were a dime a dozen as the French are renowned worlds over for their croissant, pain au chocolat and baguette, but for some reason I was more surprised to still see many of these privately owned cheese shops.

Fromagerie located below our building

3. You can eat out without the guilt.

It’s hard to eat badly when eating out here which, as a total foodie, is a gigantic bonus. Chain restaurants aren’t ubiquitous and similar to specialty shops, there’s an emphasis on seasonal, quality ingredients. Therefore menus are small and constantly changing. Several times I’ve gone to order only to be told my first choice is finished for the day – this is something I’m not used to.

In the U.S. we typically pick from bible-sized menus and food rarely ‘runs out’ at restaurants. Here, after you’re seated, a waiter brings over a large easel or chalkboard that lists the daily or weekly specials. There is no ‘standard’ menu that offers the same selection season after season, year after year. Don’t get me wrong, I certainly enjoy my fair share of chain restaurant staples as much as the next gal at home. However you can’t help but recognize the delicious and diverse meals that await you in a country that truly reveres quality over quantity.

Ravioli in cream sauce with shaved parmesan and arugula 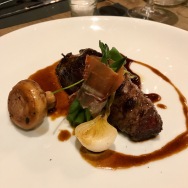 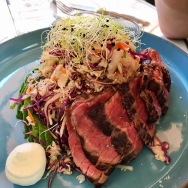 I think I can see Florida from here
You sure we should be walking under this thing??🤔
Lisboa
Can’t say I mind coming to Florence for work
From the French Riviera to River Island 🌴 It’s fun to be back in Florida☀️